“People who have seen a Blue Dog painting always remember it. They are really about life, about mankind searching for answers. The dog never changes position. He just stares at you. And you’re looking at him, looking for some answers, ‘Why are we here?,’ and he’s just looking back at you, wondering the same. The dog doesn’t know. You can see this longing in his eyes, this longing for love, answers.”

“From the start of his career George Rodigue by-passed the traditional art establishment, going directly to the public to present his art. As his popularity grew, the art elite seemed suspicious, questioning how anything so popular could have serious value. In the past decade, after many museum exhibitions and critical articles and books, that attitude has changed. With his untimely death, we now must consider Rodrigue’s place in the history of American art. Two other artists have enjoyed the same public acclaim and also were long neglected by the art establishment: Norman Rockwell and Andrew Wyeth. These three masters, while stylistically different, have similarities. Each chose to live outside the great art centers, preferring to remain in their small native towns. Each, in their own way, celebrated in their art unique aspects of the American experience. They are three of America’s great public artists.” 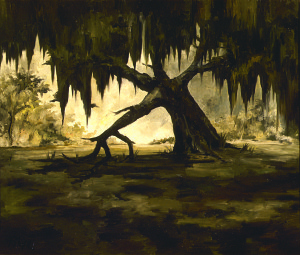 Born and raised in New Iberia, Louisiana, artist George Rodrigue was best known for his Blue Dog paintings, which catapulted him to worldwide fame in the early 1990s. His art studies at the University of Louisiana at Lafayette followed by the Art Center College of Design then in Los Angeles, California, gave him a foundation that spawned one of the greatest success stories in Southern art. 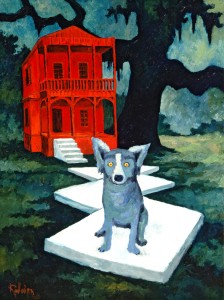 Rodrigue is the subject of twelve books, published nationally and internationally, on his art as well as numerous museum exhibitions, including career retrospectives held at the Dixon Gallery and Gardens in Memphis, Tennessee (2007), and the New Orleans Museum of Art (2008), both of which broke attendance records at each location for living artists or contemporary shows.

Rodrigue, who began painting in the third grade while bedridden with polio, had already won local acclaim for his rich portrayals of the landscape and people of South Louisiana when Blue Dog transformed the image of the original Cajun werewolf dog – the loup garou – into an international pop icon. 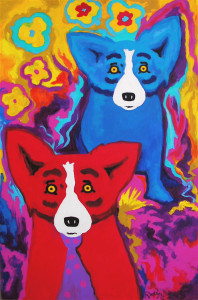 Rodrigue’s original paintings and silkscreens are exhibited in the three Rodrigue Galleries in Carmel, California, Lafayette, Louisiana, and in the flagship gallery in New Orleans, located in an historic building adjacent to St. Louis Cathedral in the French Quarter.

Founded by the artist in 2009, the George Rodrigue Foundation of the Arts (GRFA) has its roots in Blue Dog Relief, a program that raised more than $2.5 million to benefit post-Katrina New Orleans through the sale of relief prints. In total, GRFA has dispersed nearly $1.5 million to engage children through arts-related programs such as its annual scholarship art contest for high school students and Louisiana A+ Schools (LAA+). LAA+ transforms whole schools through training in arts integration. For more information, visit rodriguefoundation.org.

George Rodrigue passed away on December 14, 2013 at the age of 69 after a long battle with cancer. Rodrigue’s rich life and legacy are celebrated through the successful growth of GRFA and with new art exhibitions taking root across the country. For a detailed history of the artist and his work visit Wendy Rodrigue’s blog, featuring more than 200 essays on Rodrigue’s life and career: wendyrodrigue.com. In addition, Wendy’s book, The Other Side of the Painting, published in 2013, offers an engaging memoir of her life with the artist and the personal history behind much of his artwork.  For more information about George Rodrigue, visit www.georgerodrigue.com